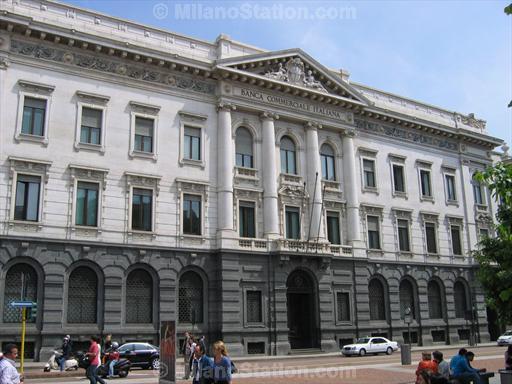 Banca Commerciale Italiana (BCI) was an important Italian bank with long history, reaching to 1862 (1862-1894 the predecessor of BCI was Credito Mobiliare).

In 1999-2001 BCI was acquired by Banca Intesa, which in 2006-2007 merged with Sanpaolo IMI to create Intesa Sanpaolo, the largest bank in Italy on many measures and one of the largest banking groups in Europe.

Piazza della Scala is the square in front of the famous La Scala Opera House in Milan’s historical centre. Besides La Scala and Banca Commerciale Italiana Palace there is also Palazzo Marino (Milan City Hall) and Galleria Vittorio Emanuele II, a shopping arcade and passage to the nearby Piazza del Duomo.